Saving the life of moms and babies around the globe 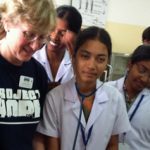 Serving as a medical officer aboard a destroyer during World War II, Dr. William B. Walsh, M.D., was moved by the poor health conditions he saw in the South Pacific – particularly by the affliction and death of young children who could have been easily saved with the application of simple medical knowledge. He envisioned a floating medical center that would bring health education and improved care to communities around the world.

In 1958, Dr. Walsh persuaded U.S. President Dwight D. Eisenhower to donate a U.S. Navy hospital ship, the USS Consolation. With $150, a dream and the support of corporations and individuals, the ship was transformed into the SS HOPE, and the organization known as Project HOPE was born.

Over the next two years, the SS HOPE was refitted and equipped for its new role as a peace-time hospital ship. The call was put out for American doctors, nurses and technologists to share their skills and knowledge with the people of developing nations – teaching while healing. For every American on board, there would be a counterpart to be trained.

Finally, on September 22, 1960, the SS HOPE set sail from San Francisco bound for Indonesia. While the SS HOPE was retired in 1974, the spirit of its voyages lives on in HOPE’s land-based programs and through the testimony of the HOPE Alumni. The SS HOPE completed 11 voyages traveling to Indonesia, Vietnam, Peru, Ecuador, Guinea, Nicaragua, Colombia, Ceylon (Sri Lanka), Tunisia, Jamaica and Brazil.

Today, the spirit of the SS HOPE lives on through Project HOPE’s partnership with the U.S. Navy which sends medical volunteers around the globe to provide health care and health education. 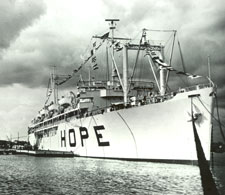 Project Hope delivers essential medicines and supplies, volunteers and medical training to prevent disease, promote wellness, respond to disaster and save lives around the globe