We care about all 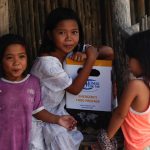 after the terrible earthquake in Turkey in 1999. It was established as humanitarian and

Since its foundation, Kimse Yok Mu is committed to providing aid to people in need at their

most dire moments and aims to leave a lasting impact on their lives. It opened tens of

branches in Turkey and several representative offices around the world. Besides being a

memberships. Kimse Yok Mu is a partner of African Union and a voting member of

CIVICUS. It works in coordination with more than 140 partners including UN bodies,

Currently, Kimse Yok Mu reached more than 113 countries around the globe with its

humanitarian and development activities. It has more than 220.000 volunteers and

The mission statement of Kimse Yok Mu is to prevent the suffering of human beings and achieve lasting change in their lives.

To implement projects that have a lasting impact on the educational and economic advancement of the most vulnerable groups; inclusive of women and children

To provide access to clean water and quality healthcare treatment

To efficiently assist people impacted by natural disasters and conflict