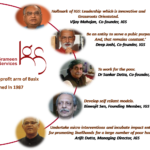 ‘Recall the face of the poorest and the weakest man you have ever seen. And ask yourself, if this step you contemplate is going to be of any use to him.’

Thirty years is not a long period in history, but it is long enough to look back and see what an organization started for, what it achieved on the way, how it changed, why it changed and was the change useful.

IGS was cofounded by Dr. Sankar Datta; Vijay Mahajan and Deep Joshi in 1987. In its early days IGS conducted experiments in income generation for the poor to help rural producers, with whom PRADAN worked, engage in commercial activities such as buying inputs and selling their produce to the market. The conception at that time was that IGS would do anything and everything that was required to be done to promote income generation activities for poor households. One another initial thought was, that it should be self reliant i.e. IGS should not go for grant based models. One idea was very clear that it was an entity meant for a public purpose; and that character of IGS as a not-for-profit entity remains constant. The original purpose was to enter into micro enterprise production mode and support producer groups and eventually farmer producer organizations (FPOs) in functions such as buying and selling and such other activities which were commercial in nature.

The first phase of experiments in income generating activities (1987 – 1994): The first project was in Kesla block of Madhya Pradesh; a distant tribal block not connected to rest of civilization was selected with the understanding that it was in such remote places that income generating activities were most needed. Three enterprise ideas which were thought of were poultry, cultivation of mushroom and setting up of small engineering / fabrication based units. Simultaneously, three other projects were with leather workers and handloom weavers in Barabunki in Uttar Pradesh, tussar rearing and reeling in Santhal Pargana area of Bihar (now Jharkhand) and number of activities with government’s Integrated Rural Development Programme (IRDP) in Kishangarh Bas in Rajasthan. The excitement of the team of entering into lives of tribal people was matched equally by the positive reception and participation of tribal communities in discussions around the kind of income generating activities which would be relevant and the skills and resources available with the communities. Through careful micro planning and sound understanding of market requirements, IGS ensured that all produce rigorously met commercial parameters.

The second phase focusing on pioneering commercial microfinance (1995-2003): One conception that became clear to the team was that the grant economy was not large enough to support the great number of poor households, therefore it would be necessary to tap the commercial capital market and an alternate credit delivery system would need to be created to support livelihoods of the poor. The first Ford Foundation grant enabled IGS to prepare a full detailed feasibility and design of Basix. Since IGS antedated Basix itself, the first launch of micro credit products was conducted by IGS through grant support received from Sir Ratan Tata Trust (SRTT). Spawning the financial services and subsequently developing ideas such as developing human resources, developing learning / training material, developing Agriculture and Business Development Services (Ag/BDS) were undertaken by IGS in collaboration with Basix. In Basix, while Bhartiya Samruddhi Finance Limited (BSFL) and Sarvodaya Nano Finance Limited (SNFL) provided financial services, IGS provided the non financial services (agriculture & livestock development services and institutional development services) necessary for promoting livelihoods.

The third phase of action research for livelihood innovations (2004 onwards): IGS chose a path of pioneering various experiments and taking risks which a typical microfinance institution (MFI) could not take, and train and educate others on how to replicate the work that IGS had initiated for its own group Basix, but which also had a strong public purpose. Innovation, whether from a bird’s eye view or from the ground was worked through in every micro detail assiduously in a live dynamic situation. IGS tested products and transitioned them into mainstream businesses.

Farm based interventions such as systems of root intensification (SRI) were implemented to reduce seed rate while simultaneously increasing productivity, promote soil testing and integrated pest management leading to increase in farmers’ income by 20-25%.

The Melghat Tribal Livelihood Enhancement Project in Maharashtra with support from RBS Foundation helped achieving the difficult task of resettling forest dwellers, outside wildlife reserves which were their original homes, and providing alternate livelihood opportunities to these households.

Through the Solid Waste Workers Project in Indore with support from Michael and Susan Dell Foundation, IGS was able to establish a unique profitable model of managing solid waste effectively, while creating livelihood opportunities for solid waste workers along the value chain.

Looking ahead, guided by a leadership which is innovative and connected to ground realities, IGS shall remain committed to centrestage the poor in all its work. IGS shall be a lighthouse to attract and channelize the energy and creativity of youth, ready to work in challenging and remote locations far away from the comfort of towns and cities, exploring new avenues for promoting livelihoods of underserved communities and incubating impact enterprises.

Country (or countries) where active
India