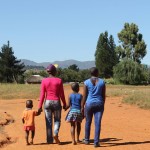 Lesotho is a small landlocked country in southern Africa that holds the unfortunate designation of the 2nd highest rate of HIV/AIDS in the world. Known as ‘the mountain kingdom’, Lesotho has a population of approximately two million and is the third highest country in the world.

Help Lesotho is widely acknowledged for its outstanding programming and its passion in championing the rights of girls and women in Lesotho. Help Lesotho confirms its commitment to build resilience, foster self-management, develop leadership and increase knowledge and healthy attitudes toward HIV/AIDS and gender equity through our core programs of education, leadership development and psychosocial support.

Help Lesotho was founded by Dr. Peg Herbert of Ottawa, Canada, following her first visit to Lesotho in August 2004. Peg learned about Lesotho and its plight from her former graduate student, Sister Alice Mputsoe, a Mosotho nun with the Sisters of Charity, a science teacher and a high school principal. Peg has cumulatively spent many years living in Lesotho building programs, staff capacity, community engagement, and two leadership centres. Help Lesotho has grown from one person into an internationally respected organization recognized as a centre of excellence in the tiny mountain kingdom of Lesotho.

Based on Peg’s faith and her professional background as a social worker and educational psychologist, Help Lesotho was founded on the premise that the most sustainable way to help people is to provide holistic, compassionate, and structured support. Thus recipients may squarely face their challenges and become confident, independent decision makers in their lives and leaders in their communities. The organization has 15,000-20,000 people benefitting from its programs annually. All beneficiaries of Help Lesotho, regardless of age, are trained and expected to take action for the benefit of others in their families and communities. Help Lesotho’s programs and program participants have become a significant force and influencer for the rights of women and children.

In Canada, the organization was incorporated in September 2005 and received registered charity status in March 2006. In Lesotho, Help Lesotho received not-for-profit status in 2006 and is unique in having its head office in the rural areas in which it works rather than the capital city. We are proud to have His Majesty, King Letsie III, as our Honourary Patron and Her Majesty, Queen ‘Masenate, as the Patron of our Centres.

Help Lesotho develops and delivers holistic, innovative programs that help people heal, learn new skills and strategies, and ultimately take action for the benefit of others. We are empowering a critical mass of children, youth and grandmothers with the knowledge and support needed for them to lead a movement that:

We achieve this mission through the delivery of education, leadership training and psychosocial support programs.

Country (or countries) where active
Lesotho