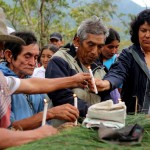 Global Witness’s first campaign exposes how the illegal timber trade between Cambodia and Thailand is funding the genocidal Khmer Rouge rebels. The exposure and advocacy leads to the closure of the border, depriving the Khmer Rouge of $90 million a year, and contributing to their downfall.

Global Witness exposes how diamonds are fuelling civil war in Angola and across Africa, thrusting the practices of the global diamond industry into the spotlight for the first time. The campaign leads to the establishment of the precedent-setting Kimberley Process diamond certification scheme and to Global Witness being co-nominated for the Nobel Peace Prize in 2003.

Global Witness conceives the Publish What You Pay campaign, and co-launches it with George Soros, Transparency International and other leading NGOs. This leads to the establishment of the world’s first international anti-corruption mechanism in the extractives sector – the Extractives Industries Transparency Initiative (EITI). EITI has led to details of more than $1 trillion of oil, gas and mining revenues being put in the public domain for the first time.

Global Witness investigations reveal that China has been importing up to 1.3 million cubic metres of timber from Burma per year, and that around 98% of this trade was illegal. Chinese diplomats attempt, unsuccessfully, to persuade Global Witness not to publish its findings. The furore generated by the ensuing Global Witness report prompts the Chinese government to close its land border to timber from Burma in early 2006.

Global Witness publishes a leaked document showing the investments made by the Libyan Investment Authority. By exposing the vast amounts of cash held offshore, Global Witness put a spotlight on the role western banks played in propping up the brutal Gaddafi regime and locked down the money during the revolution.

The PWYP campaign now consists of over 650 organisations operating in more than 60 countries around the world. Its campaign to force oil, gas and mining companies to open up their books to scrutiny has a major success as ground-breaking transparency laws passed in the EU combine with similar laws passed in the US in 2010 (Section 1504 of the Dodd Frank Act) to form the basis of a global transparency standard.

Many of the world’s worst environmental and human rights abuses are driven by the exploitation of natural resources and corruption in the global political and economic system. Global Witness is campaigning to end this. We carry out hard-hitting investigations, expose these abuses, and campaign for change. We are independent, not-for-profit, and work with partners around the world in our fight for justice.