Growing Global Investment in Cluster Munitions Despite International Bans Against Use 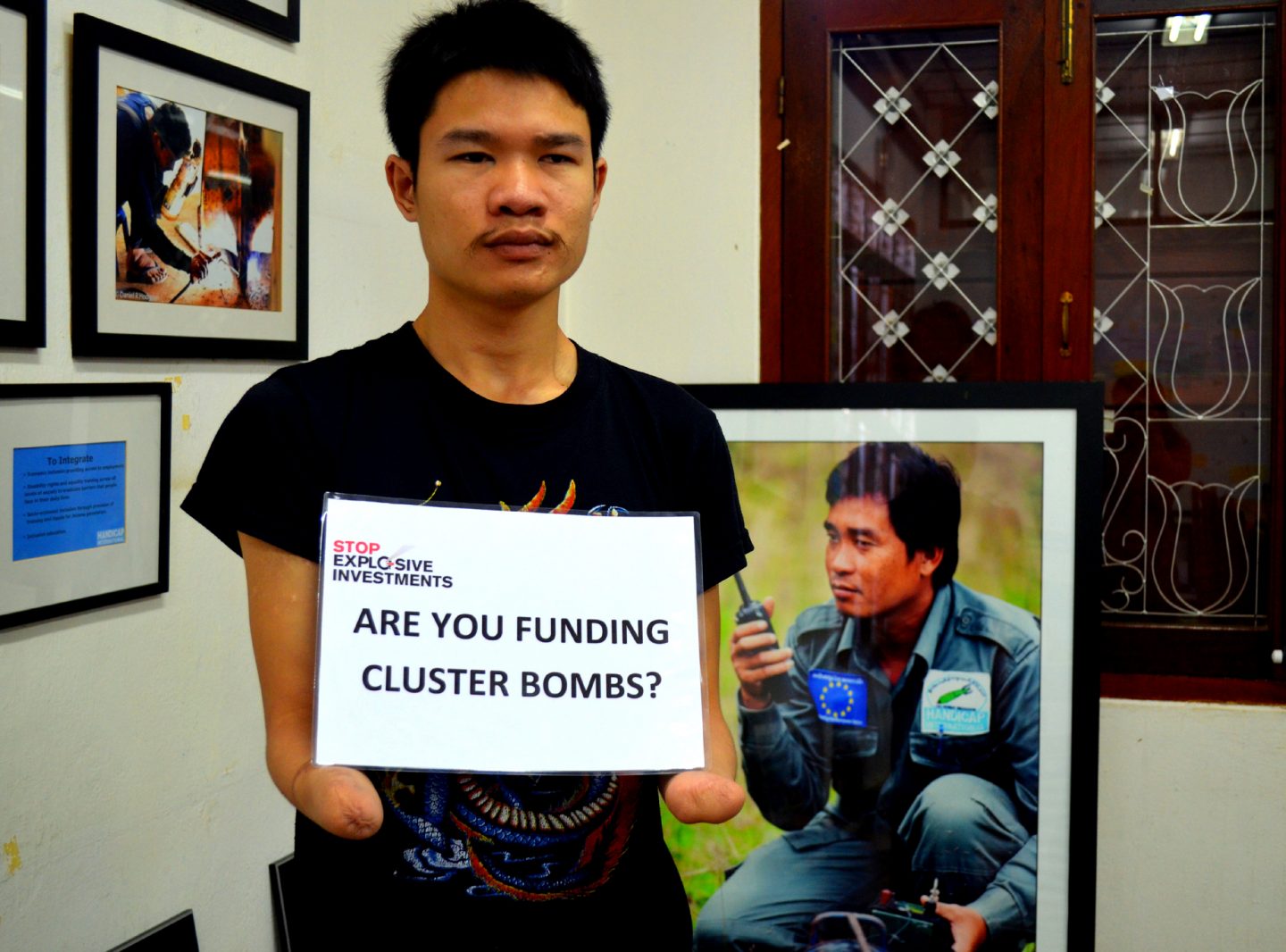 One of the munitions hit the wall of his brother Ali Saed’s home, taking his wife’s leg and injuring their four-year old daughter. Another munition exploded right next to the house of Hussein Saed’s other brother. At least three other families from the same village were harmed in the cluster munition strikes that day. Since the start of Saudi-led coalition bombing in Yemen in March 2015, 91% of the known casualties have been civilians. Of these, at least 22% have been children, like Hussein Saed’s four-year-old niece.

Cluster munitions have been banned by 119 countries because they are indiscriminate weapons. Submunitions scatter over a wide area, striking anything in their path – be it a military target or the homes of villagers in Al-Hayma Port. Submunitions that fail to explode during strikes, often called “duds,” lie in wait for the first victim that comes their way, often long after a conflict has ended.

The United States, which still remains outside the Convention on Cluster Munitions, recognized this civilian harm when it decided in May to halt further transfers of CBU-105 cluster munitions to Saudi Arabia, following reports by Human Rights Watch, Amnesty International, and the United Nations.

Despite growing global stigma against this outdated weapon, global investment in cluster munitions producers continues to increase. According to “Worldwide Investments in Cluster Munitions; a shared responsibility,” a new report by Dutch peace organization PAX, 158 financial institutions from 14 different countries have invested $28 billion in companies producing cluster munitions between June 2012 and April 2016. The report is being released today in Canada in collaboration with the Cluster Munition Coalition and with support from Canadian Members of Parliament and civil society.

Perhaps more shocking still, 20 of these investors are from countries (Canada, France, Germany, Japan, Spain, Switzerland and the United Kingdom) that have joined the 2008 Convention on Cluster Munitions. These countries thus are prohibited from assisting in any way in the production of cluster munitions.

In the United States, the production of cluster munitions (CBU-105 Sensor Fuzed Weapons) by Textron, a Rhode-Island based company, and the sale of these cluster munitions to Saudi Arabia and others, is especially disturbing. CBU-105s have been used by the Saudi-led coalition in at least six airstrikes in Yemen since March of last year. Several civilians, including at least two children, have been injured in these airstrikes. This all happened despite US prohibitions on the use of the CBU-105 near areas populated by civilians. The production and sale of Textron’s CBU-105s have led to sustained international and local protests, with weekly protests in front of Textron’s headquarters in Providence, RI.

Of the 158 financial institutions examined in PAX’s report, 49 were found to have financial ties to Textron. While most of these are US-based financial institutions, nine are based in countries that have joined the Convention on Cluster Munitions. Increased civil society pressure in those countries will likely dry up resources for such investments even while cluster munition production remains legal in the US.

Although investment in companies producing cluster munitions did increase over the period covered by the PAX report, the writing is on the wall for investors and producers of these weapons. As stated by Slovakia, a former cluster munition producer, in joining the Convention on Cluster Munitions in 2015, “it is clear that under the influence of the Convention, the markets for trading in banned cluster munitions will increasingly narrow and investment in this area will have little prospect. . . Possible further export activities of cluster munitions can seriously damage the reputation of the foreign policy of the Slovak Republic.”

Indeed, it is clear that the international norm against the use of cluster munitions grows stronger every day, even among those countries that have yet to join the Convention. Cluster munition use is increasingly limited; just a handful of countries continue to use cluster munitions, such as those in Syria and Yemen. Countries accused of using cluster munitions, even the ones who have not joined the Convention, typically go to great length to deny such use, even in the face of irrefutable evidence to the contrary. The political cost to be associated with the use of these inhumane weapons is high.

The Cluster Munition Coalition expects that what was clear to Slovakia last year is becoming increasingly clear to the few remaining companies and financial institutions that support them. These companies can act now and be on the right side of history – or be forced out of business by legislation prompted by the damning evidence of the devastating harm their weapons cause.

Between control and co-option: The future of civil society in Erdoğan’s Turkey