Published by Jean-Christophe Nothias on March 8, 2018 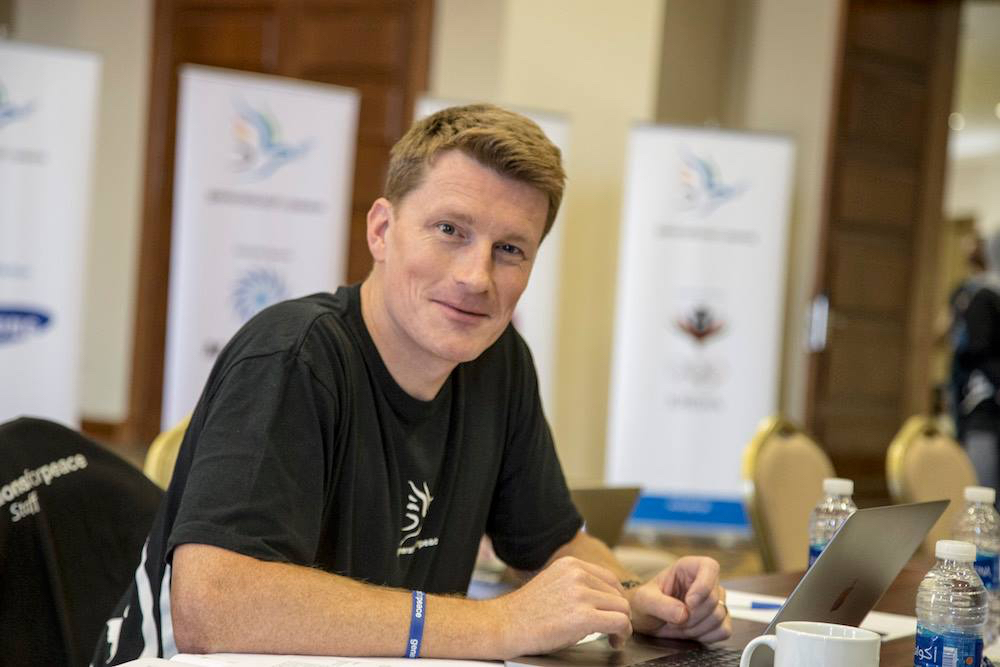 Few non-profit organisations were born in the Middle East, (Jordan), but how many worldwide have accomplished what Generations For Peace has in just ten years? The story isn’t about funding or tradition. It’s about modernity, brightness, elegance and efficiency. Generations For Peace (GFP) is an incredible fast learning, fast growing, peacebuilding machine, rooted in a region that endures conflict and violent extremism, a direct threath to societies.  Now with presence around the planet, GFP stands out as a leading organisation. Talking to this gentleman CEO is something that can have consequences and lead anyone into action. So be aware and ready for that.

Jean-Christophe Nothias (JCN): Generations For Peace is in auto-learning mode. How come? Is this one of the reasons that GFP has been on a steady expanding course. How can you explain that?

Mark Clark (GFP): Generations For Peace is ten years old, and we describe our journey so far as a journey “from Passion to Impact!”. This captures the passion we share as a small team of staff and our commitment to impact; but more deeply it reflects that all our work is about supporting youth leaders around the world, to address burning issues of conflict and violence in their own communities – part of their everyday lived experience – which they are passionate about changing, but may lack the knowledge, skills, tools and structure to address effectively. So, the last ten years have been an incredible learning journey as we experiment, test, adapt and improve: working to become more and more effective at supporting them to turn their passion into concrete, measurable, lasting, positive impacts.

This attitude of learning and adaptive programming is embedded in our organisational culture, and in all our processes. For example, we use participatory design, monitoring and evaluation to drive learning in communities, valuing the fact that the sense-making and valuing of results, and decisions about the future direction of programming, must be made locally by communities themselves. And we invest a lot in training and development of our staff and volunteers, and in knowledge management to deconstruct, document and re-engineer all our core organisational processes so they can be more effective and fit for purpose as we grow.

This learning culture is also captured in our four “drivers of change”: innovation, quality, impact and sustainability. We believe our focus on these throughout our journey has guided us to be more effective and agile.

JCN: Lately, you’ve experienced scaling-up. You’ve also witnessed as part of your efforts and projects, a typical system change in terms of education. Could you elaborate on that?

Mark Clark: We’ve gone through ‘proof of concept’ in very diverse conflict contexts. Our model is not singular: our programming framework provides a robust consistent structure, but within it there is important flexibility for locally-contextualised demand-driven activities. This approach has proven it can deliver measurable, sustainable impacts at the grass roots in a wide variety of conflict settings in 50 countries over the last ten years.

The next challenge is to test it at scale. With invaluable support from donors and partners, we have been implementing larger and larger programmes in different countries, but Jordan is our first opportunity to take our programmes to truly nationwide scale: to 3,800 locations including every public school and every youth centre in the country.

Scale is important if we want to effect system-wide change. We apply systems thinking and understand communities as complex adaptive systems; but operating at scale demands institutionalising knowledge-transfer and behaviour change in people to influence the entire system. Globally, we work a lot within the public education system, both because systemic violence in schools is often a major barrier to educational performance, and also because teachers have considerable influence and schools are a strong existing structure in communities for sustainable engagement with children and youth.

Youth centres provide a similar structure. So, the fact we are scaling to every public school and every youth centre in Jordan is an exhilarating challenge but absolutely the right challenge for us to embrace now, in partnership with Ministry of Education, Ministry of Youth, UNICEF and the EU. Success will also set a precedent for engaging at nationwide scale in other countries.

JCN: In 2017, GFP signed a new partnership with UNFPA for its programmes in Iraq? What has convinced UNFPA to move into these GFP programmes. What triggered it?

Mark Clark: We have worked in Iraq since 2007, but suspended our programmes as the security situation deteriorated. With large numbers of displaced people, and the liberation of areas formerly occupied by ISIS/Daesh, there is a pressing need and new opportunity to support activities to reduce violence and vulnerability, and strengthen social cohesion and resilience.

Whilst Generations For Peace is supported by several UN agencies (UNICEF, UNESCO, UNAOC), this is the first time we have partnered with UNFPA. We believe it reflects the credibility Generations For Peace has earned within the UN system (highlighted by our hosting special forums last year on youth-led peacebuilding at UN headquarters in New York on the International Day of Peace, and at UN headquarters in Geneva during Geneva Peace Week). But it also reflects the intersectionality of issues of conflict and violence. UNFPA’s mission is “delivering a world where every pregnancy is wanted, every childbirth is safe and every young person’s potential is fulfilled”, but in conflict settings like Iraq such goals cannot be achieved without addressing broader systemic issues of violence and vulnerability (including sexual and gender-based violence); and supporting community-level initiatives to strengthen social cohesion and resilience. There exists a deficit of trust between groups, and between citizens and the state, so this work is urgently needed at the grass roots level to rebuild the social fabric of communities, in parallel with efforts to rebuild physical infrastructure and strengthen state institutions to provide effective service delivery.

JCN: What is Jordan 2250 Coalition? And what your role in that ambition to implement a UN Security Council Resolution?

2250 followed the hosting, by HRH Crown Prince Al Hussein of Jordan, of the Amman Forum and “Amman Declaration” on Youth Peace and Security in August 2015, so it has Jordanian “fingerprints” which we, as a Jordanian international NGO, are proud of. And indeed, all our work at the grass roots in communities is really translating the words of the resolution into actions delivering positive lasting impacts on the ground.

Generations For Peace helped initiate the Jordan 2250 Coalition and we hosted its launch with an event gathering youth from all twelve governorates of the Kingdom at our headquarters in Amman. The Coalition continues Jordan’s commitment to implement 2250 at local and national level in Jordan, by engaging youth and supporting their participation in community actions to foster youth leadership, strengthen resilience and social cohesion, and prevent violence. The Coalition includes: Ministry of Youth, Crown Prince Office, Crown Prince Foundation, Generations For Peace, iDare, Jordan National Council for Women, Mercy Corps, Search For Common Ground, West Asia North Africa Institute, the British Council, UNDP, UNESCO, UNFPA, UNICEF, and UN Women. We’re proud that it’s the world’s first coalition of government, non-governmental organisations and UN agencies to collaborate together on implementation of 2250.

JCN: Fighting against extreme violence is a difficult task, maybe a never ending one. How do you approach this? How do you envision success? What so different in terms of monitoring and evaluating such programmes compared to others you implement? Can you share examples?

Mark Clark: Yes, building resilience against extremism, radicalisation, and bigotry are perpetual challenges. We understand peace-building as a continuous effort, working “upstream” to prevent conflict becoming violent. Generations For Peace is therefore focused on transforming conflict by intervening in “cultural violence” at the level of deeply-held values and issues of identity, which may fuel extremist views which in turn may legitimise and normalise structural violence (discrimination, exclusion, unfairness) and even direct violence against particular people.

Such identity-related cultural violence exists in all societies and is not new, but recent years have seen an alarming surge in extremist viewpoints and violent extremist organisations across the world, from ISIS/Daesh and other groups across the Middle East, to Boko Haram in Africa, to far-right and white supremacist movements in Europe and the USA. Our core approach remains the same: to intervene through existing structures in communities to engage youth and foster positive values of tolerance, positive peer groups and positive experiences of being trusted and supported to demonstrate their leadership of activities making a positive contribution to their own community.

So for example, in Tunisia – which had the largest number of youth per capita joining ISIS/Daesh – we are working in partnership with Ministry of Education, training teachers in secondary schools and using our innovative sport- and arts-based behaviour-change activities to engage youth, foster greater social inclusion, and strengthen peer groups, positive role models and positive alternative narratives. And we measure these changes in attitudes and relationships, different forms of violence, feelings of resilience, a sense of belonging, hope for the future; vulnerability to radicalisation, and sympathy and support for violent extremism.

JCN: Thinking about your vision of peace building how would you say it has evolved over the last 5 years, maybe 10 years? Is that term still valid?

The April 2016 resolutions adopted by the UN Security Council and General Assembly introduced the  concept of “Sustaining Peace”, and represented a fundamental shift in the way the UN approaches peace and conflict, towards a new focus on preventing conflicts by strengthening the attitudes, institutions and structures that foster Positive Peace.

These same factors also support many other positive development outcomes, such as thriving economies, better inclusion, high levels of resilience. We can see these linkages clearly in the Sustainable Development Goals, and our work not only contributes directly to Goal #16 (Peace and Justice) but also #4 (Education), #5 Gender Equality; #10 Reduced Inequalities; and #17 (Partnerships).

The economic argument for such peace building is also compelling. The Institute for Economics and Peace March 2017 report on the “Cost-Effectiveness of Peacebuilding”, based on 20 years’ worth of data across multiple countries, provides robust evidence that for every $1 spent on ‘upstream’ conflict prevention, $16 is saved on the ‘downstream’ costs of violent conflict. And yet, the biggest challenge remains funding for peace building:

How can we push that message into the mainstream? Even a small nudge of this funding dial would have a massive positive impact. 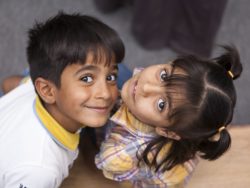 The 2018 Edition of the Top 500 NGOs World is live: BRAC is #1 for the third year in a row
Privacy
When NGO Advisor makes data available online, we use cookies to help us to do this. Some can't be switched off, and some are optional to support your experience in other ways.
Manage options Manage third parties Manage vendors Read more about these purposes
See preferences
{title} {title} {title}